The yellow fields of Oil Seed Rape are in full flower during May and some of June (about 6 weeks in total), the bees are very active collecting nectar and making it into honey, so Alistair, one of our large animal vets, has added some ‘supers’ to the hive. A picture of a super is below, it is a shallow wooden box and in it are hung wooden frames with a sheet of wax foundation placed in each frame. The picture shows one of the frames filled with foundation on top of the full super. The foundation is made from bees wax and is embossed with a honeycomb pattern. The bees use this pattern to build the honeycomb and store the honey in the comb. Oil Seed Rape honey is very sweet but sets quickly so as soon as the blossom finishes, hopefully I will get some honey. The other job Beekeepers have to do at this time of the year is watch for the bees preparing to make new queens, if they do then the original queen will swarm off with about half the bed in the hive and leave the new queen to hatch in the hive with the rest of the bees. Swarm control for Beekeepers involves watching for the signs of this and giving the original queen and half the bees in the hive, somewhere to go so that they don’t swarm away. If you see a swarm ring a beekeeper, if it is somewhat they can get access to, then hopefully he can come a capture it and put it into a hive. 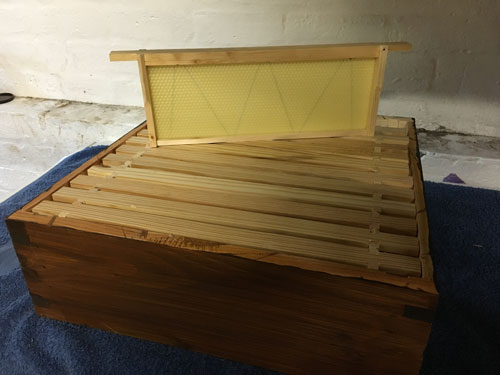